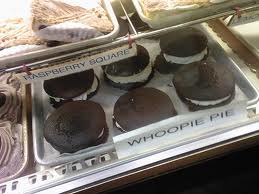 So when I heard of this "Whoopie Pie" Debate, I had to find out more. Lancaster... Maine... who's the rightful owner of the famed Whoopie Pie? Never being a fan of this "cakey", dry dessert, I was curious of what was going on. Digging deep into the history, I come to find out that there really is no answer... from Lancaster to Massachusetts to Maine, it's origin is unknown.... however the folks at the Harvest Moon Bed and Breakfast wanted more information!

I find the most intriguing thing is the folklore behind the Whoopie. This excerpt taken from Micheline Maynard in her article dating back to March 17 of 2009 in the New York Times is by far what I find to be the most interesting.

Food historians believe whoopie pies originated in Pennsylvania, where they were baked by Amish women and put in farmers’ lunchboxes.
Tired from a morning’s work, the farmers purportedly would shout “Whoopie!” if they discovered one of the desserts in their lunch pails. 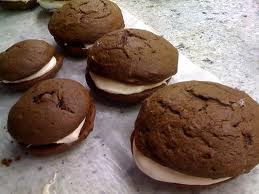 So as I see it, they could be fighting about this for eons.... I say let them have at it.... In the mean time, since I do not really like Whoopie Pies, I came up with my own recipe! I'll just sneak under the radar and self proclaim that I have the BEST WHOOPIE PIE!